Here follow three research reports from the field of cognitive science and neuroscience of how culture and language affect skills. 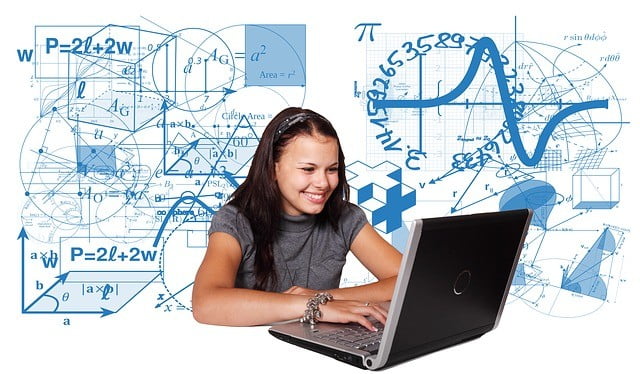 Research from CEA-Inserm-Université Paris Sud-Collège de France shows that there is a network of brain regions involved in advanced mathematics and also simpler arithmetic operations. The research method was to study the brains of fifteen professional mathematicians using functional MRI where MRI images were taken while they thought for four seconds about advanced mathematical and non-mathematical statements. The result shows that the network is only activated when numbers are seen, and it showed no overlap with the language regions. Something that raises the question can there be thinking without language?

Especially since when they were asked to think about a history or geography problem, the network which activated was completely different to the mathematical regions and involved certain language regions. The research aided by technology shows what other recent research has found, e.g., that the mathematical brain regions network is an ancient evolution and is active in children long before they start school. Albert Einstein also reached the conclusion that we can have thoughts without a language. Source: Press Release from CEA

Bilingual people use different approaches in math depending on which language that is used. As the labour market speeds up its globalization, the mobility of students continues to increase and migration, in general, follow on the same path, bilingualism, meaning speaking more than one language on an advanced level, will be more and more common. New research from the University of Luxembourg shows that calculatory processes in math are directly affected by language. That the students use different approaches to solve more advanced tasks depending on which language they are presented.

The research shows that depending on the language used, different brain regions were activated for the same task. The research team led by Dr Amandine Van Rinsveld and Professor Dr Christine Schiltz from the Cognitive Science and Assessment Institute (COSA) at the University of Luxembourg recruited students with Luxembourgish as their mother tongue, and that continued their academic studies in francophone universities in Belgium, mastering both German and French at an advanced level. As borderless mobility, as mentioned above, continue to increase this linguistic research area requires much more exploration. The research team also concludes:

A study led by the University of Cambridge that was published in the journal Psychological Science shows important differences in cognitive skills among young people, while these differences are not recognized among their parents. The research targeted totally 1428 children and their parents in the United Kingdom and Hong Kong. Everybody completed the same four tasks that measured executive function skills related to inhibition, working memory, task switching, and planning. For instance, when it comes to executive function for 10-year-old in Hong Kong was not the same as 12-year-old in the UK, while no such difference was recognized among their parents. The researchers conclude:

“Our findings showed substantial contrast between adolescents in the United Kingdom and Hong Kong when it came to executive functions, which may help to explain substantial differences in academic success. However, these differences do not extend to their parents – which leads to the question of whether these differences might go away over time.”

More research is required in this subject field, they also conclude.

Interactivity in books from B-InteraQtive Publishing

Developed in SOE PublishingLab
Interactive books On Demand
Interactive Books with Gamification are developed on our platform SOE PublishingLab. As traditional ebooks mostly are digital replicas of the printed book. The interaQtive book is making use of the technologies in order to empower the book for the benefit of the reader. The next generation ebooks in form of interaQtive books offer optimized interaction design to empower the reader. This includes Engaging, Inspirational, and Learning features, which especially is workable for non-fiction and edubooks, as well as children’s and teen’s books.